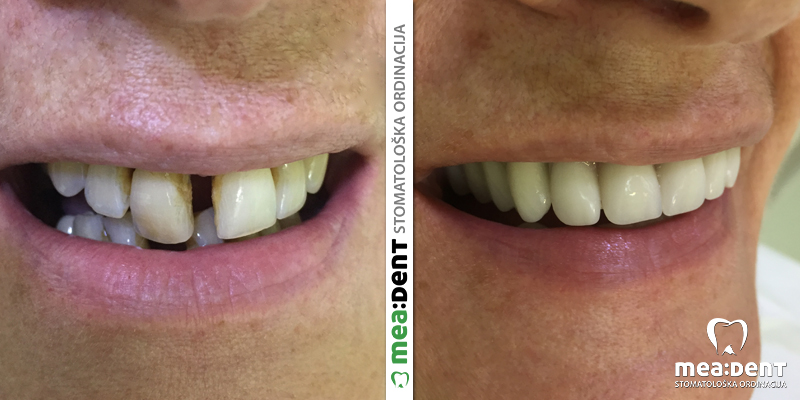 Patient D. I., born in 1967, has contacted our practice due to a serious problem, parodontopathy. After several years of the support dental apparatus decay, the patient was not able to function normally and she was determined to look for help of a dentist and finally solve her problem.

After an analysis of the patient’s panoramic 2d and 3d radiograph, we have concluded that it was a severe form of parodontopathy that had required several months of work by the entire dentistry team. She has needed an overall change, something that would drastically change her quality of life.

First, it was necessary to extract all teeth affected with parodontopathy, which we could not use in any case. 8 teeth has been extracted from the upper jaw, and 6 from the lower jaw.
Parallel with extraction of these teeth, an intervention regarding addition of an artificial bone with placement of the PRF fibrin transplant was performed. Those are natural membranes formed by centrifuging the patient’s own blood, while a matrix for filling a bone defect caused by an aggressive paradontopathy is obtained. In such a manner, after 3 months, the ridge (bone) gets a form that is adequate for an acceptance of a visil denture with a frame.

In the patient’s upper jaw, there was a space for 2 dental implant placement in the left side, and she had her 3 teeth on the right side. These three teeth had a normal condition of the supporting apparatus. We have decided to make a combined work, a visil denture on implants with locators and a metalceramic bridge with milled crowns. Such work has guaranteed an exceptional stability and functionality of the denture.

The patient has sent us a photo of her teeth when she was young, so, after carefully choosing, we found the teeth that correspondent to her old teeth when she was young.
We have placed 2 dental implants in the mandible, on the right side, and on them a metalceramic bridge was made, and in the other spaces, we have compensated for a lack of teeth with metaloceramic bridges.

The total work with pauses lasted about 6 months, until everything was finished. We did not want to overload the implants until they reach their full stability.
In the end, the patient was very satisfied with the achieved results; she now speaks very well, laughs and eats. And the teeth she now has remind her of her appearance from her “early days”.

If you have any “unsolvable problem”, you may contact us. We shall try to help you.