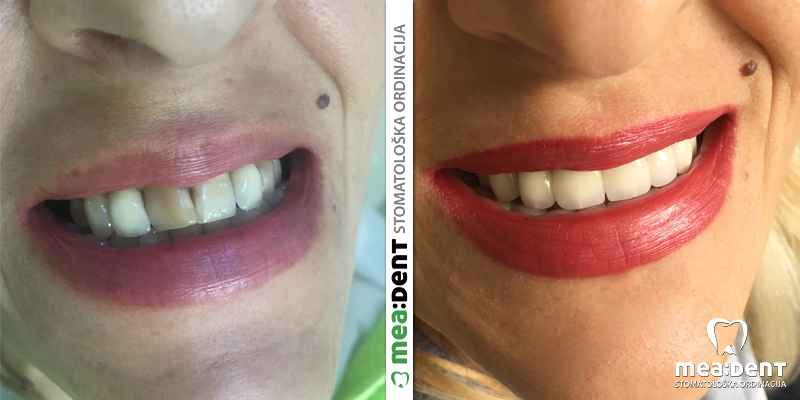 Patient J.S., born in 1968, has contacted us because of her desire to finally beautify her smile. She has longed for a long time to have a beautiful smile, to nicely speak and take photos. After everything “has clicked”, she decided to visit us for an examination and to see what could be done.

The patient’s occlusion was fairly challenging from the prosthetics point of view, because on the lateral right side the patient had a cross-bite, and a reverse overlap on the left side. In the front portion of the face, the occlusion was normal only for the first four teeth.

The question was whether the patient had such occlusion since she got her permanent teeth in her youth, or this teeth position was forced by some teeth movement? In her case, her teeth were naturally positioned in this way in her youth, because she did not want to wear braces. We have decided not to make a drastic change in the occlusion class and to, where possible, correct the existing condition. Where a reverse overlap was too big, we have only reduced it, although significantly, but it was impossible to change the class.

All patient’s teeth were healthy, but poorly positioned and dark. Only upper right central incisor was previously treated, so we had to do make a metal core build up that served as reinforcement for dentures support.

In the end, we made 6 metalceramic bridges for the patient in the most natural light shade B1. She was delighted with her appearance, and after a few days, she commended the function, as well.